In biology, techniques that can identify and localise DNA and RNA sequences are highly valued, used to detect certain genes in chromosomes, study developing organisms, characterise abnormalities, as well as diagnose diseases caused by genetic or chromosomal mutations.

If the sequence of a gene of interest is known, a complementary sequence to that gene can be synthetically designed, which will hybridize to that gene in situ. By attaching fluorescent markers to the probe, microscopy can be used to detect and quantify these probes, this is the concept behind fluorescence in situ hybridization, or FISH. 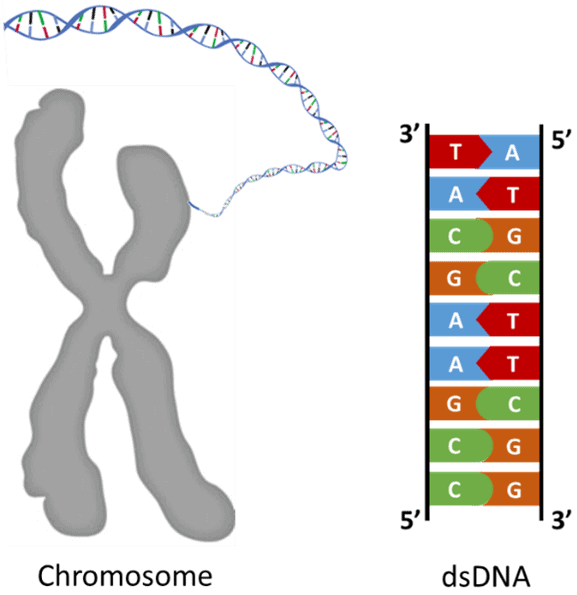 The FISH assay was developed in the early 1980’s and has seen widespread use ever since, due to alternate genetic analysis techniques often being more time‑consuming, and FISH gaining recognition as a genetic mapping technique related to the Human Genome Project. FISH probes come in variety of shapes and sizes, depending on the target of interest, and can be used to detect anything from single nucleotide deletions to entire chromosomes.

Firstly, FISH probes are designed. These probes can be made from DNA, RNA, or even synthetic nucleic acids, but it must be complementary to the target of interest, both in length and sequence. Once the genetic sequence is developed, fluorophores are added, creating a fluorescent probe for a FISH assay. Additional steps can be taken to amplify the number of probes for more signal, such as using polymerase chain reaction (PCR).

In order for the probe to hybridize to the desired target DNA/RNA, both the probe and target are heated to ~90 °C, denaturing the nuclei acid and causing complementary strands to come apart. The temperature is decreased, allowing the probe to hybridize to the exposed complementary strand of the target. Washing steps remove any FISH probes that did not successfully hybridize, while the remaining probes are detected using fluorescence microscopy. 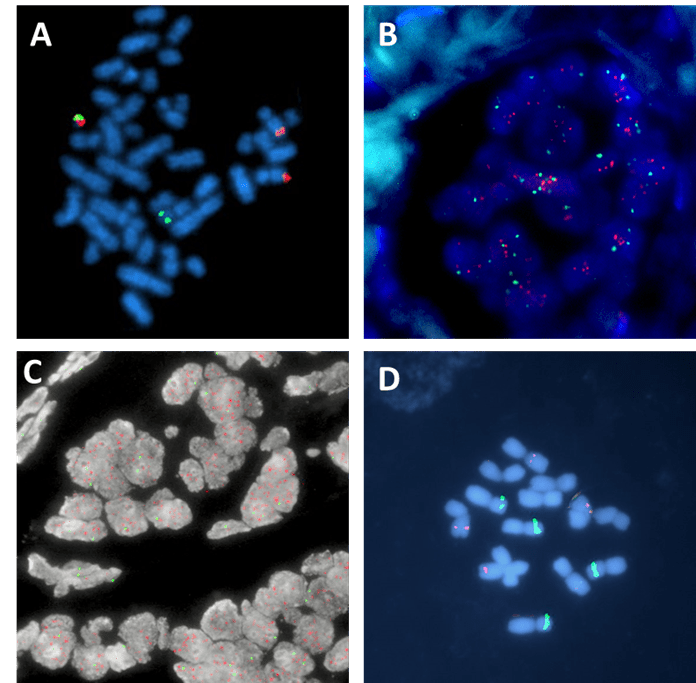 As FISH is quite a general technique, the applications are varied and depend on both the target sequence (from a single base pair up to an entire chromosome), and the desired specificity of the FISH probe.

FISH probe specificity can be fine-tuned so that the probe will only hybridize if it is the exact complement to the target sequence, some probes will not hybridize if even one nucleotide is missing or changed (due to point deletions, copy errors or mutations), especially useful for studies in oncology and genetic syndromes, where FISH assays can potentially identify problems with sequences that can lead to disease.

Other FISH probes can be less specific, used to identify certain genes with a margin for error, or to identify whole chromosomes. The latter technique is useful for karyotyping and chromosomal studies, such as identifying diseases like trisomy 21 (Down’s syndrome), studying sperm cells, and researching specific parts of chromosomes such as the centromere and telomeres.

Due to the combination with microscopy, FISH can be used to visually identify diseased cells from a large population of cells, with images fed into detection algorithms or sent to trained personnel for detection and diagnosis. A combination of FISH with microfluidics (also termed µFISH or MA-FISH) can lead to portable diagnostic lab-on-a-chip capabilities, useful in clinical environments.

FISH serves as an experimental platform that can be modified to suit specific research purposes, over time many variations have emerged:

FISH is a technique that allows for fluorescent labelling of specific parts of the genome, from single genes to entire chromosomes, which can then be observed using microscopy. FISH found popularity during the Human Genome Project and is now widely-used in medical and research settings for detection, localisation, diagnosis and study of how genetic information can change during development. FISH now exists in many variations and is a powerful platform linking fluorescence microscopy with genomics.